This site uses different types of cookies, including analytics and profiling cookies (its own and from other sites) to send you advertising in line with the preferences you have shown while online. If you want to know click here. In closing this window, by clicking on OK or accessing any feature within this site you are consenting to the use of cookies.

OK
the land of joy

The Science of Speed

Year after year, the Panigale V4 is renewed to become faster and more exciting on the track for both the amateur and the professional rider.

For 2021, the Panigale V4 and V4 S models become Euro 5 compliant (only for Markets where Euro 5 is applied), maintaining the maximum power and torque levels unchanged. To comply with the new European standard on polluting emissions, various refinements have been made to the Desmosedici Stradale exhaust line and to the engine calibration.

The electronic package that equips the Panigale V4 also evolves and now includes the latest generation Ducati Traction Control which is even more predictive: the DTC EVO 3 with a strategy derived from Ducati Corse.

The Riding Mode strategy is also new; specifically, the Race Riding Mode has been split into two mappings that can now be freely compared in the individual parameters, allowing the rider to quickly compare two different configurations to define the best set-up based on the track and riding style.

The Panigale V4 and Panigale V4 S models are also equipped with new self-bleeding brake and clutch pumps derived from those used for the first time on the Superleggera V4.

Among the features added to the bike for 2021 is the chain guard fin, an important safety precaution that allows you to avoid dangerous contacts with the chain and crown in the event of a slide.  In addition, for those who use the bike all year round, there is now provision for heated grips, while the ignition key has a new, more modern and elegant grip.

During the track tests Michele Pirro improved his best lap time by 0,4". The most surprising results came from non-professionals riders: a fast rider improved by 0.8", while an amateur was 1.3" faster, thus reducing his gap from the performance of a professional rider like Pirro.

The Panigale V4 2020 is easier to ride and more performant both on the single lap and on the overall time.

On board the new Panigale V4 2020 at Bahrain International Circuit 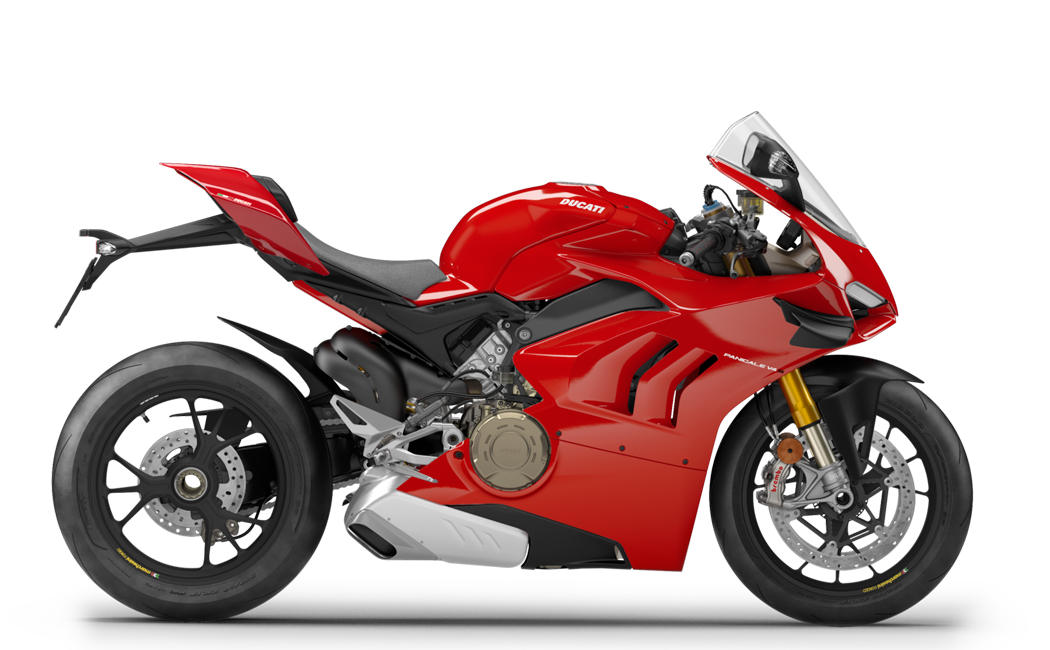 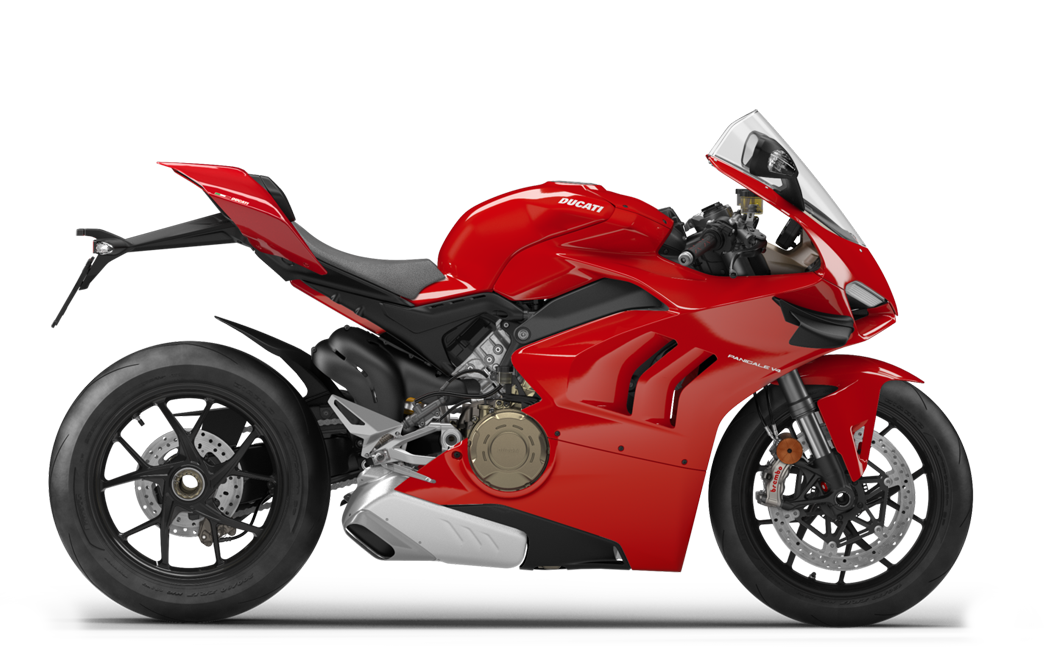 For Ducati, the V4 layout at 90° is the utmost expression of sportiness for a motorcycle engine. It is no coincidence that it is the same solution used in the MotoGP Desmosedici engines.

Compared to a classic in-line four-cylinder, the lateral compactness of the V-engine allows greater centralisation of the masses and makes it possible to limit the weight on the front end of the bike. Furthermore, the shorter crankshaft generates a smaller gyroscopic effect. All these aspects have a positive impact on the bike\'s dynamics, helping to make it light and fast when changing directions.

The optimal integration of engine and chassis is a fundamental concept behind every Ducati project. That is why the Desmosedici Stradale was developed to be mounted rotated backwards by 42°, like the Ducati MotoGP engines, to optimise weight distribution, use more extensive radiators and to shift the swinging arm pivot forwards as much as possible.

Integration of engine and chassis

The ABS system, equipped with the Cornering function to allow ABS intervention even with the bike leaned over, has been radically upgraded to introduce new intervention logic and control types.

The new Ducati Traction Control EVO 2 (DTC EVO 2) strategy is an offshoot of the Ducati Desmosedici GP18 and is already employed on the Panigale V4 R and V4 R SBK.

This 3-level system ensures lightning-fast starts, letting the rider focus on releasing the clutch. Once set, all the rider has to do is engage first gear and open the throttle.

This 3-level system ensures lightning-fast starts, letting the rider focus on releasing the clutch. Once set, all the rider has to do is engage first gear and open the throttle. During the initial moving-off stage, as the rider modulates clutch release, DPL stabilises the engine at optimal revs according to the selected level. In the second stage, when the clutch has been fully released, DPL controls torque delivery to maximise acceleration on the basis of the selected level.

DPL makes use of DWC functions and always keeps DTC active so as to ensure complete safety at all times. Automatic system disengagement occurs above the end-of-start speed, or once third gear is selected. To protect the clutch, a specially developed algorithm allows only a limited number of consecutive starts. The number of available starts is reset when the bike is ridden routinely.

The DPL has three different settings and is activated by pressing the specific key on the right-hand switchgear. Level 1 favours high-performance starts, level 3 is safer and more stable.

In addition to minimising shift times, DQS EVO 2 allows clutchless down-changes, making hard braking more effective than ever. The system includes a two-way microswitch built into the shift lever linkage; every time the gear shift is actuated, it sends a signal to the Desmosedici Stradale engine control unit. Thanks to full Ride-by-Wire control, the system works differently for up-changes and down-changes, integrating spark advance and injection adjustment during up-shifts with an auto-blipper function during down-shifts.

Extent and duration of system operation are designed to ensure seamless shifting even during extreme track sessions; during down-shifts the system works in concert with the anti-patter clutch and Engine Brake Control (EBC).

The EBC (Engine Brake Control) system was developed to help riders optimise bike stability under extreme turn-in conditions; it does so by balancing the forces applied to the rear tyre under severe Desmosedici Stradale engine braking conditions.

The EBC (Engine Brake Control) system was developed to help riders optimise bike stability under extreme turn-in conditions; it does so by balancing the forces applied to the rear tyre under severe Desmosedici Stradale engine braking conditions. The EBC EVO system of the new Panigale V4 2020, optimised according to lean angle, monitors throttle body valve position, selected gear and Desmosedici Stradale crankshaft deceleration during aggressive braking and adjusts throttle aperture to balance out the torque forces applied to the tyre. EBC EVO has three different settings, integrated into the Riding Modes.

Electronic suspension offers a choice between manual “Fixed” mode - which allows for \'virtual-click\' manual adjustment (32 clicks between fully open and fully closed for the suspension and 10 for the shock absorber) of compression, rebound and steering damping - and automatic “Dynamic” mode.

When “Dynamic” mode is selected the system automatically adjusts - on the basis of information received from the IMU 6D and other sensors - compression and rebound damping in response to riding style.

The DLT GPS feature automatically records and saves lap times and displays them directly on the dashboard each time the bike crosses the finish line, the coordinates of which are set by pressing the flasher button.

The DLT GPS feature automatically records and saves lap times and displays them directly on the dashboard each time the bike crosses the finish line, the coordinates of which are set by pressing the flasher button. If a lap time is the best of the current track session, the Best Lap function causes it to flash for 5 seconds. At every lap - for a total of 15 consecutive laps - DLT GPS records lap time, maximum rpm and maximum speed; the information can be called up from the relevant menu.

Australia: The Australian ride away price is based on the manufacturer suggested retail price (MSRP) for a private buyer, 12 months registration, 12 months CTP, stamp duty and recommended dealer delivery fee in Australia. Actual ride away price may differ depending on dealer, state of registration and individual circumstances. Contact your authorised Ducati dealer to confirm pricing. Ducati reserves the right to vary the ride away price at any time.


New Zealand: The New Zealand price is based on the manufacturer suggested retail price (MSRP). This excludes all other costs associated such as dealer delivery, registration and taxes. Contact your authorised Ducati dealer to confirm pricing. Ducati reserves the right to vary the pricing at any time.

Choose your country or region